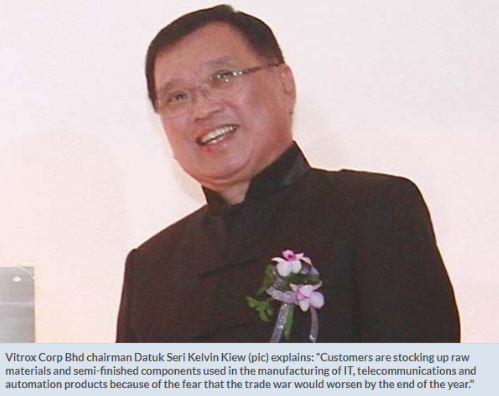 THE electronics manufacturing companies in Penang expect good prospects for the next six to nine months, due to the impact of the worsening US-China trade war.

Vitrox Corp Bhd chairman Datuk Seri Kelvin Kiew explains: “Customers are stocking up raw materials and semi-finished components used in the manufacturing of IT, telecommunications and automation products because of the fear that the trade war would worsen by the end of the year.

“Customers don’t want to experience getting cut off from the supply chain again, which happened last year when the US-China trade war peaked.

“To avoid this problem, customers are stocking up their inventories”.

He adds that the group expects sales of its automated board inspection (ABI) equipment in the second half to improve over that of the first half.

Vitrox, an automated machine vision inspection system provider, has seen its share price rising by 15% from last month. Kiew adds that if the US-China trade war were to worsen, some multinational corporations in China would look to relocate to South-East Asia to continue manufacturing.

“Malaysia will be a potential destination to benefit from the plans to relocate.

“This could be a reason for the sudden surge in Malaysian technology companies share prices, ” Kiew says.

On the longer-term outlook, Kiew says there is no clear visibility.

“A lot will depend on the status of the pandemic and the US elections, ” he adds.

The US-China trade war looked set to intensify again after China reneged on its agreement to buy US$200bil worth of products over the next two years from the United States.

The Trump administration has also issued a new rule in May that will bar Huawei and its suppliers from using American technology and software, a significant escalation in the White House’s battle with the Chinese telecom giant and one that is likely to inflame tensions with Beijing.

The rule change, which is slated to go into effect in September, will block companies worldwide from using American-made machinery and software to design or produce chips for Huawei or its entities.

Companies can apply for a licence to continue supplying those products, but the administration said the presumption would be to deny those requests.