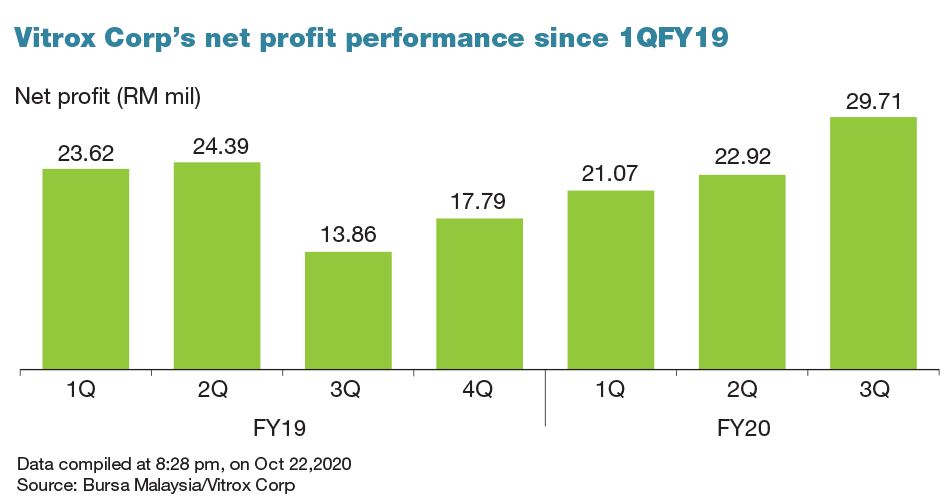 Some quarters see the stellar set of quarterly earnings of Vitrox’s, which specialises in automation solutions for multiple industries, as the bellwether of the trend in the semiconductor industry, one of the sectors that the group is serving.

The group’s quarterly net profit leaped 114% year-on-year (y-o-y) to RM29.71 million in 3QFY20 from RM13.86 million in the previous corresponding quarter, according to the bourse filing.

It did not declare a dividend for the quarter under review. So far, Vitrox has declared 2.8 sen for the nine months ended Sept 30, 2020 (9MFY20) compared with four sen a year ago.

Vitrox attributed the strong revenue growth to demand for its Machine Vision System (MVS) and Automated Board Inspection (ABI) that skyrocketed by 122% and 66% respectively.

“With a diversified business model, serving multiple industries and presence in more than 30 countries, the group has not experienced significant downward impact so far.

“The group has taken and will continue to take more stringent and prudent cost control measures in order to stay competitive and resilient. Besides, the Group will continue to focus on market expansion activities, customer relationship building and product innovation to grow the business further,” said Vitrox in its quarterly result announcement.

Vitrox’s share price has climbed 76% since the start of the year to a record high of RM13.94 today.