26th December 2021 - Company Of The Year: ViTrox Corp Bhd - Test equipment giant sets its sights on greater expansion while contributing to the world

While the storm of the Asian financial crisis was wreaking havoc in 1998, two young men quit their jobs at ­Hewlett-Packard Malaysia in Penang to start their own business. Few would have done that, especially in harsh economic conditions.

The little seed capital then helped cultivate the homegrown automated test equipment (ATE) maker, which today serves more than 600 customers locally, as well as in China, Taiwan, the US, Mexico and 40 other countries. It is an industry leader in machine vision technology.

Chu is the group’s president and single-largest shareholder, with a 26.9% stake; Siaw and Yeoh sit on the board as executive directors and executive vice-presidents, with 19.04% and 10.23% equity interest respectively.

The trio takes pride in the fact that ViTrox is not a contract manufacturer. It makes machine vision inspection systems that scan for defects in semiconductors and other hi-tech gear. 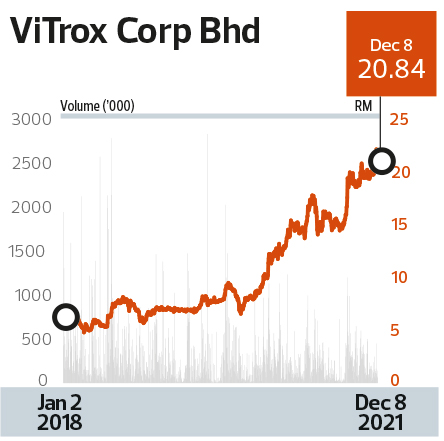 Remarkably, since its 2005 listing on Bursa Malaysia, ViTrox’s share price has jumped 185-fold from 12 sen (adjusted price) to its historical high of RM22.16 on Dec 1.

The company’s market capitalisation has grown from RM55.8 million on its first listing day to almost RM10 billion now, making it one of the country’s largest ATE manufacturers.

Based on the latest semi-annual review of the FTSE Bursa Malaysia Index Series, ViTrox is now included on the FBM KLCI reserve list, comprising the five highest-ranking non-constituents of the index by market capitalisation.

In fact, ViTrox has scored high on return on equity (ROE), earnings growth and returns to shareholders over the last three years. And that performance won the group the coveted The Edge Billion Ringgit Club (BRC) Company of the Year award this year.

The group’s earnings grew at a three-year CAGR of 8.4%. On a longer horizon, its revenue and net profit have grown 19 times and 10 times respectively over the past 15 years.

In an exclusive interview with The Edge in July, Chu stressed that the management envisions much for the group to achieve, as it intends to grow beyond the ATE industry and semiconductor space. 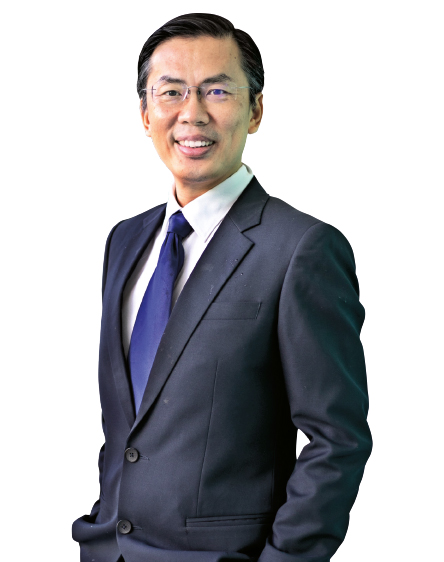 Chu: As long as we can make a positive contribution to the world, we will go

“ViTrox will not be heading towards the sole direction of ATE. Perhaps two or three business units of ours will focus on ATE and be the best in the world. But, as a group, we want to move up the value chain, be an innovative technology company, and we want to use technology and equipment to expand into other areas such as precision smart farming.

“As long as we can make a positive contribution to the world, we will go,” he said.

Those who have been to the corporate headquarters of ViTrox at the Batu Kawan Industrial Park usually leave impressed by the architecture of the building. A bird’s eye view of ViTrox Campus 2.0, which has a built-up area of 450,000 sq ft, reveals an eye-shaped structure on a green building with its own solar photovoltaic (PV) system.

The facility also incorporates an eco-pond with a rainwater harvesting system for irrigation, a garden in the centre to promote a green working environment, and a sky herb garden to promote healthy eating habits.

In ViTrox’s V-Gallery, there is an old Pentax SLR camera on display. It is a second-hand camera that Chu’s mother bought for him for his 20th birthday. That gift sparked Chu’s interest in photography.

“I never thought the photography skills that I learnt would benefit me when I ventured into machine vision technology. So, I always tell others that it was a mother’s selfless love for her son that led to the birth of ViTrox eight years later,” he says.

Under its 10-year expansion master plan, ViTrox aims to invest more than RM2 billion as well as expand its floor space to between two million and three million sq ft, from 450,000 sq ft now. The group also intends to increase its workforce from less than 1,000 now to between 3,000 and 5,000 in the next five years.

“We plan to set up an institution of technology or a university that is people-oriented and emphasises work-based and practical learning. We want to produce talents who are creative, energetic and kind-hearted, who are competent and willing to work relentlessly to solve the world’s problems,” Chu says.