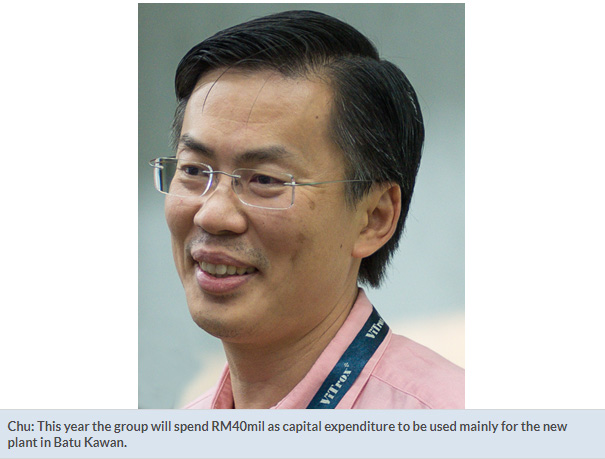 “We can see this happening in Asia, especially in the automotive and solid state memory industries.

“The highly precision parts used in the automotive sector were previously checked manually.

“We released the first generation of the the advanced robotic vision equipment late last year and the sales are encouraging,” he said.

Chu said the company would spent another 12% to 13% of its revenue for 2018 on development and design activities.

“This year the group will spend RM40mil as capital expenditure to be used mainly for the new plant in Batu Kawan,” he added.

The advanced robotic vision equipment contribution to the company’s revenue will not be immediate. “We can expect this segment to contribute positively in two to three years,” Chu said.

The key markets for these equipment, used for checking semiconductor components like sensors and printed-circuit board assembly products, include the US, China and South-East Asia, where prices range between US$100,000 and US$500,000 per unit, depending on their complexity, size, and functions.

According to Chu, the cash flow has improved because the cash conversion period has shortened to 210 days from 405 days two years ago.

Cash conversion measures how fast a company can convert cash on hand into inventory and accounts payable, through sales and accounts receivable, and then back into cash.

“The days sales outstanding period has also been reduced to 115 days from 158 days two years ago.

“As a result, the inventory conversion period has also been cut to 179 days from 303 days two years ago,” Chu said, adding that the first-half of this year looked strong.

“The first quarter of 2018 should be another strong quarter.

“In the corresponding period of 2017, the revenue generated was RM69mil,” he said.

LMC Automotiv, which provides data on automotive production and sales forecasts, said in a recent report that global auto sales may hit an all-time record this year of 97.3 million vehicles.

“That 2.1% jump over 2017 would come despite a weak market in North America, as well as softening growth in what is now the world’s largest automotive market, China,” LMC researchers said.

LMC also forecasts that China, as well as the rest of Asia and Western Europe, will see modest sales gains in 2018.

“The big drivers of global growth in 2018 will be Central and Eastern Europe, as well as a rebounding South American market.

“All three of those regions are expected to post double-digit gains this year,” the researchers said.